"Motorsport is a key feature of our time, and driving is almost as natural to today's people as cycling for the past generation."

This introductory sentence of the user manual of the electric model track of Bub probably still applies today as it did back then, in 1953, when this track was presented for the first time at the Nuremberg Toy Fair.

Karl Bub is one of the very traditional names of German toy manufacture. Founded in 1851 in Nuremberg, the development of mechanical toys on articles with clockwork drive up to the electric toy took its course, even up to the now considered very rare electric model track.

From today's perspective, this track may well be seen as a pioneer of today's slot racing. The idea of ​​driving the cars in a slot was not an exclusive innovation at the time - for example Märklin had already developed a similar prototype in 1937 - but this toy was the first to become comercial with this principle. Nobody would have guessed at the time that this kind of tracking would become the basis for electric car racing tracks. Rather, the track was intended as a supplement to the much more widespread railroad. Today, it is certain that the production and distribution of this extraordinary orbit fall in the years 1953 to 1955, so even before the appearance of VIP and Scalextric from England.

The car is visually kept relatively simple and is made of Bakelite. Three color variants are known: red-brown, black and dark green. The power is taken from the side in the rail slot and the car is also held by a pin in the rear of the chassis in the lane. The rail has a non-conductive carrier material of solid cardboard and 2 halves of sheet metal fastened thereon.

Despite this revolutionary idea at the time and further attempts to establish itself further in the railway sector by introducing other gauges (S and HO), the path to insolvency was unstoppable. From today's point of view, this development is astonishing, especially in the 1950s, which was characterized by the economic upswing. 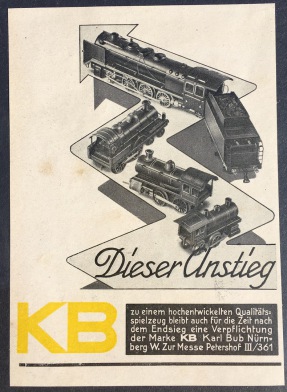 Advertisement "Quality Toys Karl Bub, Nuremberg", published in 1943, on p.2 of issue 4 of the magazine "Das Spielzeug", published in "Verlag Deutsche Spielwaren Zeitung, Pössneck"
Certainly, the entire German industry in the 40'er years under the forced conversion to the production of war equipment suffered severely. The question that arises, if any, is to what extent or how clearly the owners have positioned themselves against the policy of the German Reich at the time. Was it  tolerated under the circumstances then given or was it actively supported. Whether the denazification of the post-war years in Germany could have had an influence on the brand Bub with regard to industrial sizes remains, of course, speculation. It is conceivable, however, that the Bub brand was simply shunned in this post-war period in order not to associate itself with the fatal German policy. If advertising such as the one shown here from the year 1943 should have come into the hands of the occupying powers, it might also explain why z. B. also led to the introduction of the popular with the Americans railroad track S to no success. As I said, it is all very speculative, because even the mark Märklin was demonstrably connected to the highest levels of management of the Nazi regime (see Hermann Göring, Carinhall). 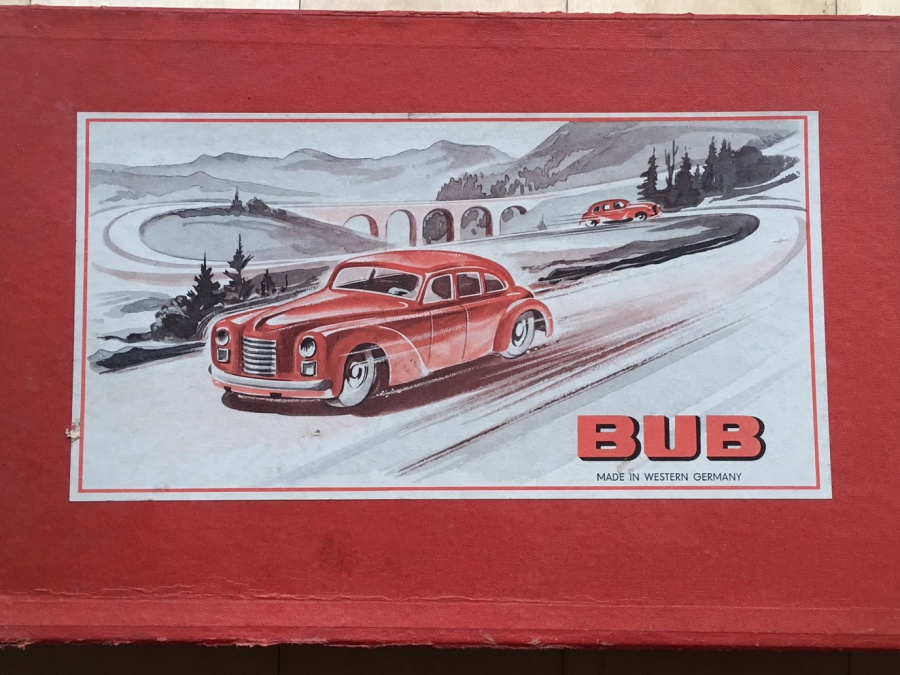 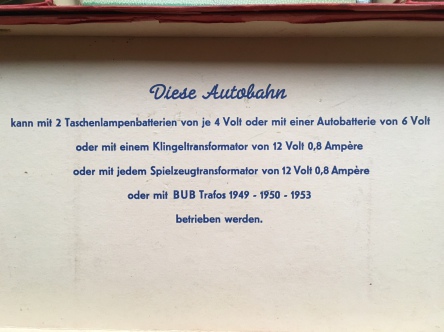 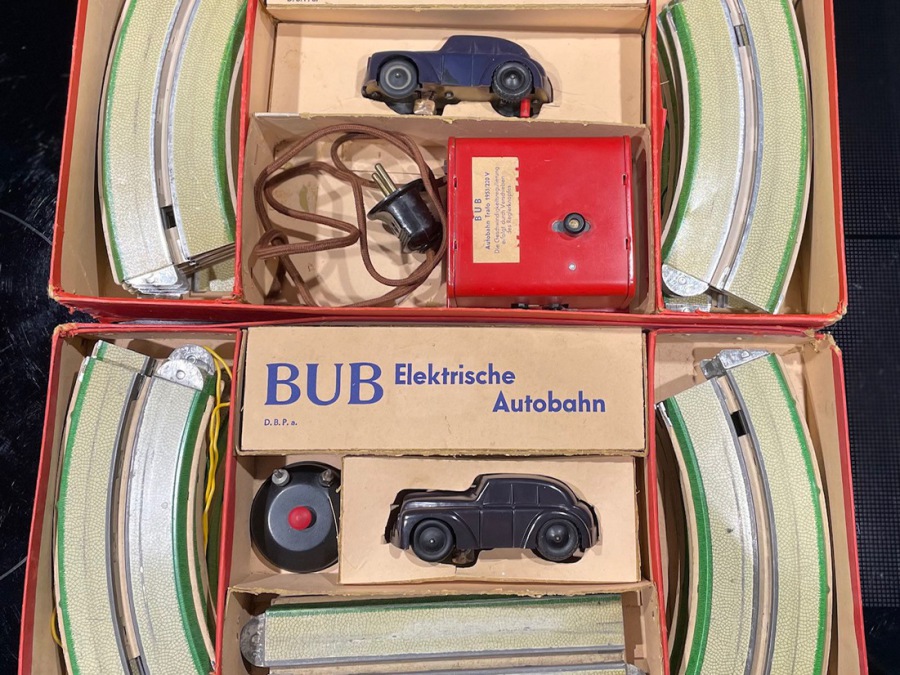 Compare the very rare box with the 1953 Autobahn transformer

Another variant of the two well-known boxes of the BUB Autobahn has just been found.

Up to now I was not aware that there was a separate transformer for the BUB Autobahn. This box is significantly higher than the other two, has no text on the inside of the lid and no button in terms of content to regulate the power supply. Instead, a BUB "Autobahn Trafo 1953" with a slider is attached. "The speed control is done by moving the control button", so it is written as text on the transformer. BUB was not only a pioneer of today's slot racing, but also invented the first speed controller. 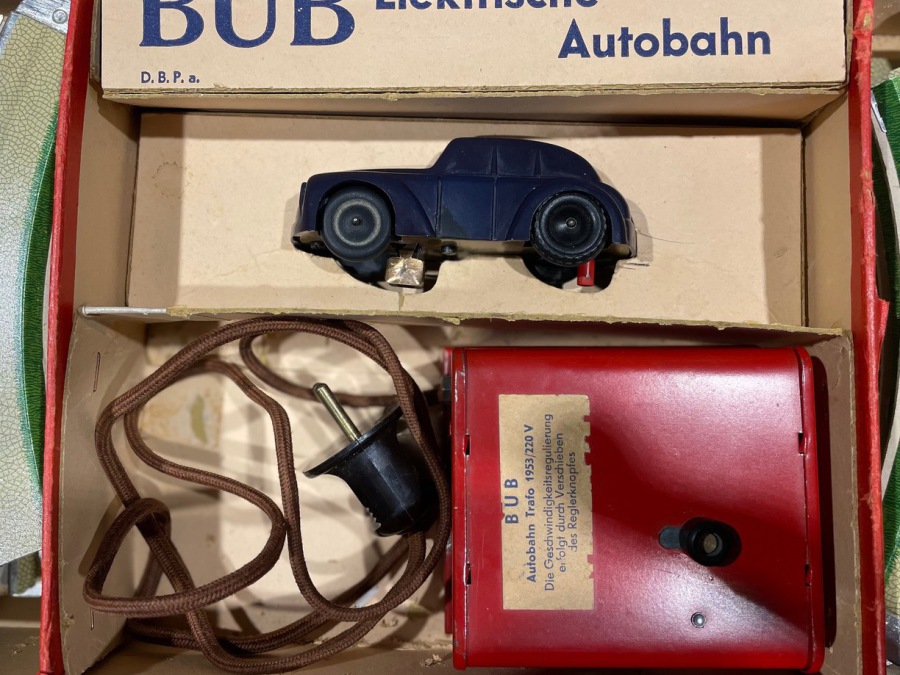 Box with the Autobahn Transformer 1953 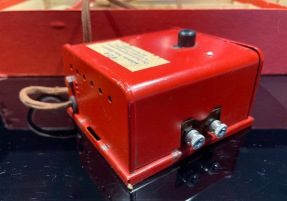 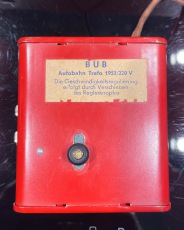 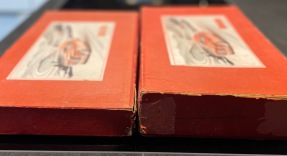 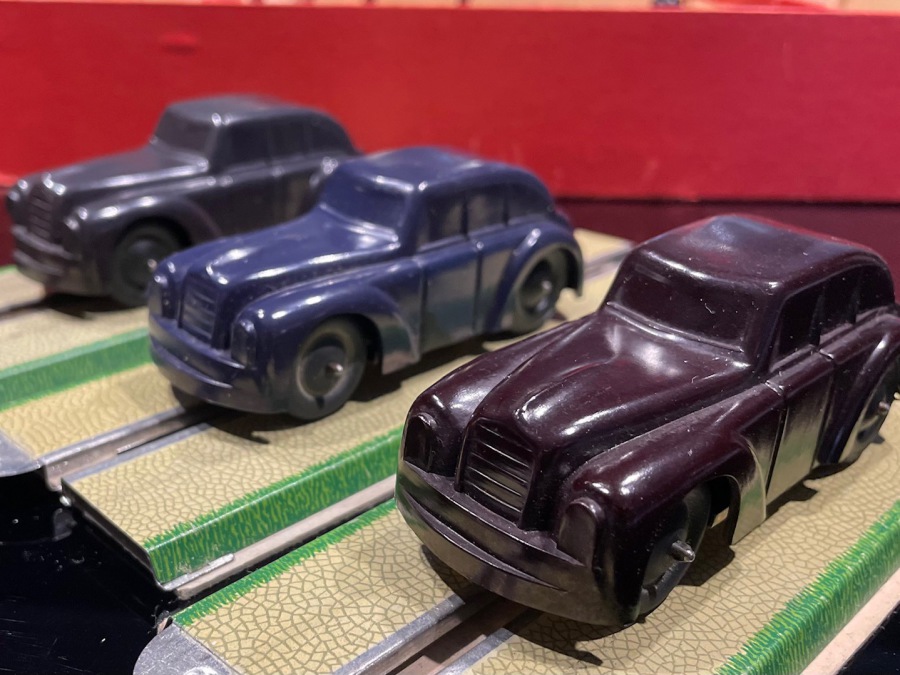 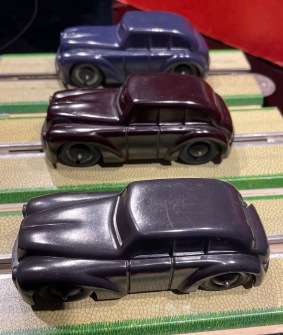 The 3 colors of the car: black, blue, red